Solutions for Naked GoPro Problems (for some of them at least)

This post is mainly about the problems I encountered trying to use a naked GoPro 6 Black and solutions I found. (not connecting to wifi of the phone and unpredictable working behaviour). Tip: You can scroll down to the red boxes to get to the solutions , and scroll to the green boxes to get to the suggestions direcly if you dont want to read the whole post.

Kidding, I am a cinematographer and I have always been fastinated by the crazy indoor footages. So I wanted to add a 130gr 4k stable footage capable drone that can also do crazy camera movements to my arsenal. I started with simulators, went on with Emax Tinyhawk 2 (even put a GoPro 4 on top of it :D) But of course it is not good enough and without the stabilization of Reelsteady app it is not much use in a profesional shooting environment.

So I decided to go with the Beta85X carying a GoPro 6 Black. While I was waiting for my order to arrive I was looking in the community for the problems I might face with this setup. The biggest problem seem to be its not being relaible. Some people were saying its working flawlessly but some were complaining about the reliableness of the drone with lots of problems like, gopro not powering up at all, not connecting to the app and its been sometimes working and sometimes playing dead.

And when my Beta85X arrived and when I put all the parts together (beta85X drone, Betafpv gopro bec board, naked gopro 6 black) I encountered all the problems writen above. First it worked perfectly, than it suddenly stopped working. Than I would wait sometime and it would work again. I even tried sd card commands for restarting the wifi from Oscar Liang's blog post. At first it seemed to work but in the morning again it was not working. After trying every possible connection way (soldering to V1 bec board, soldering to v1.1 bec board, directly connecting the power and ground to the pins on mainboard of gopro, trying to power it using the USB C port) I realised a pattern when it was working and when it was not working. (took arround 7 hours including some nervous breakdown time :D )

Update:I wrote all this stuff down here but after publishing the post one helpfull community friend suggestion made it so much easier for people having this problem.

For easy solution; Here is Fahmi Alias's suggestion (and apparently It is in BetaFPV's manual writen in red :D but we all missed it.);

"Expend the range of USER1 in your modes tab so the cursor is in orange zone by default."

The funy thing is it also fixes wifi connection problems !!!

What this means is;

This is WRONG! (which mine was setup as)

And this is RIGHT! (which should have been and I wouldn't bang my head to the walls while trying to figure out why my gopro was not working.)

This little change should solve your; Gopro red led constantly on but not doing anything, Gopro not connecting to wifi, Bec buttons not working, Gopro not powering up problems.

If you fixed the USER1 as shown above and still having problems you might want to check the methods below.

Here are my findings, (I hope this weren't mantioned somewhere before or I am a fool (yes I am as mentioned above all my problems fixed by 5 second betaflight configuration :/ ) for not being able to find the solution in the web and trying to find the solution my self, spending hours on it God damnit !!! A little drama before we start :D Its true though...)

Problem 1: "not connecting to wifi of the phone";

It will not connect to wifi if you shorted ground and mode pins and using gopro as it is powering up automaticly. Deshort the pins and start the gopro by pressing the power button. Be amazed with the gopro found text on your Gopro App. (also you might want to consider soldering a small cable to wifi pin to have better reception)

If you forget to bind the gopro before ripping it apart you can use this command lined that you can upload to the sdcard to reset and open the wifi. As shown on Oscar Liang's post.

It will not start up if you connect or power the gopro through your drone "before" you power up your radio transmitter. And mine doesnt work even I disconnect and reconnect the power to the GoPro if the transmitter is not powered before powering the drone.

Power on your transmitter before pluging the battery to the drone which you have your go pro already connected to. Be amazed with the short blinking light of bec's power input light. Push the on button on gopro if you are not using auto on on the gopro and be thrilled by the short quick blinks that gopro making to say he/she is alive and ready to roll.

Most people having different kind of problems seem to have one of these problems underlaying, and I hope this post will reduce the agony and make flying naked gopro more fun for you all :D

In addition to these, I found myself wanting to use both "auto on" and "wifi" at the same time without going in to the hassle of soldering and desoldering the ground and mode solder points. So I decided to update supplied BetaFpv gopro bec and the case to my liking (they were not ballanced very well anyway.)

I add an extra button between ground and mod pins so this way I can turnoff "auto on" and use the wifi if I need to change a setting on the app to change frame rate, resolution or the white balance settings and flick the switch back to contuniue using it in "auto on" mode. 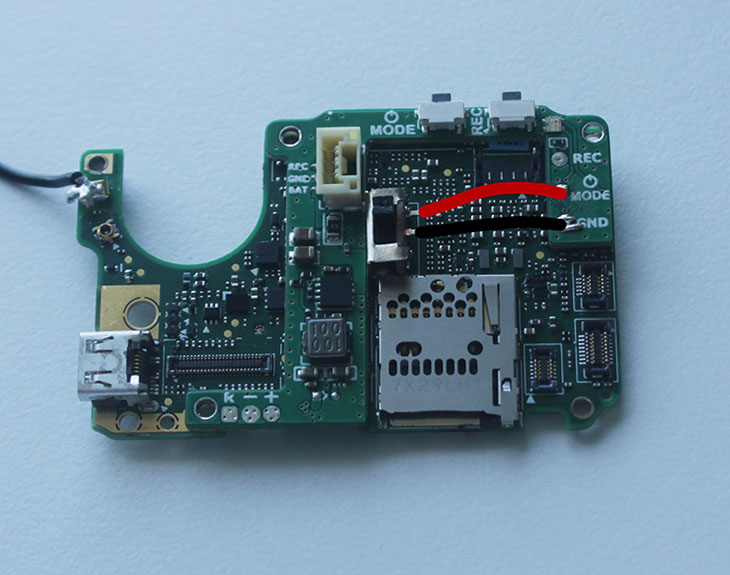 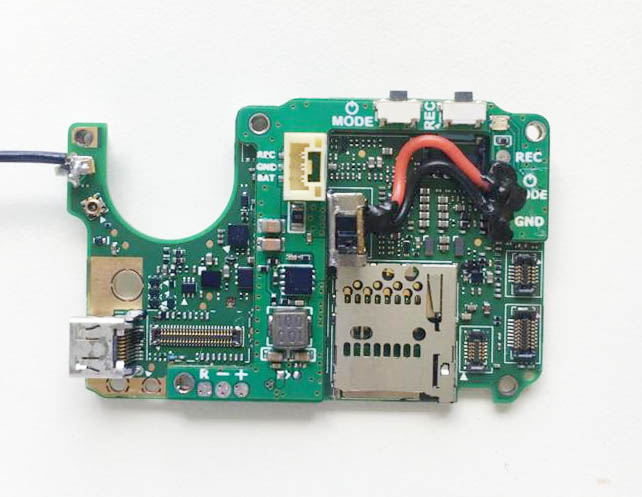 I also unified the main and the back cap part of the BetaFpv naked gopro case and modified it to be in the same weight but much more stronger and protective printing it with PP filament as you can see in the picture above.

(Im using Verbatim PP filament printing at 235C on the Hot End and 50C on the built plate. Putting some packageging tape on the built plate seems to be working really well since PP filament loves to stick to itself and packeging tapes are mostly made out of PP material. But it is sticking to the print so you might want to use a clear tape.)

If you want to use it here are the STL files.

Hope the info here in this post will save some lives :P

GoPro on a Tinyhawk 2?